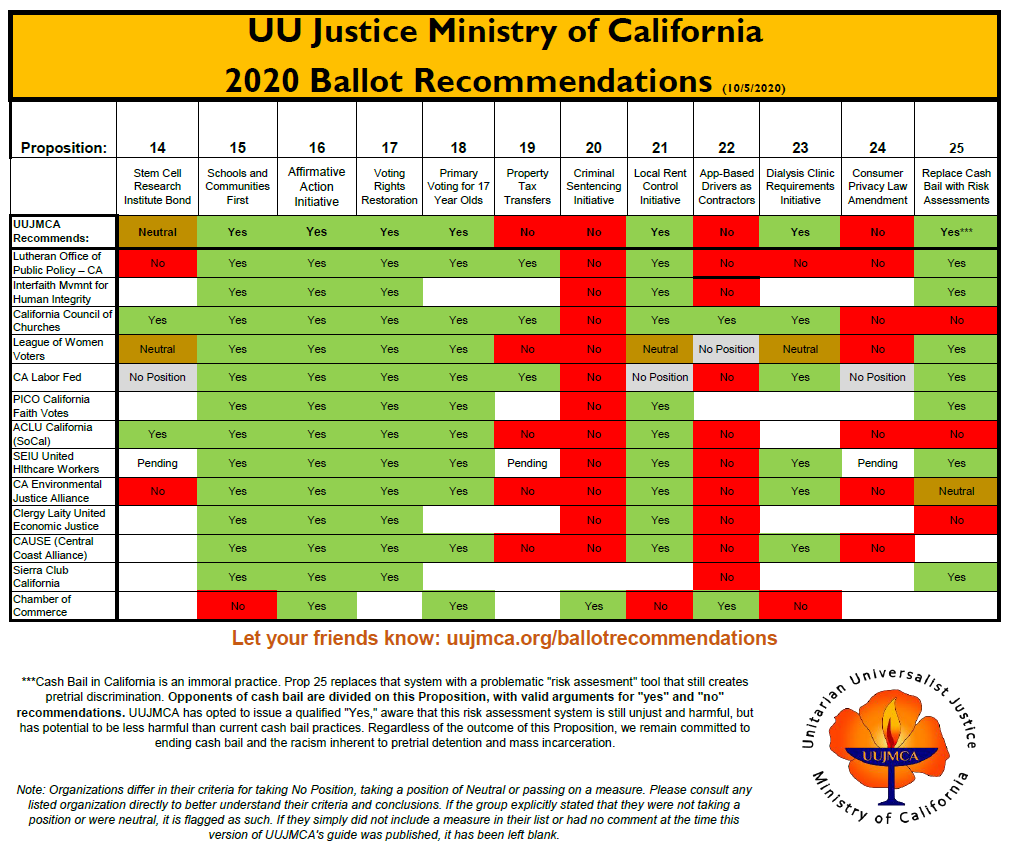 UUJMCA is excited to share our 2020 California Ballot Recommendations. After consultation with several local and statewide organizations & collectives, and deep reflection on how our values call on us to engage the proposed initiatives, we have put together this grid of recommendations, including our own, for you to be able to make an informed selection. We are releasing these now with an understanding that more information may become available as we get closer to November 3rd. However, due to the statewide vote-by-mail opportunity and concerns regarding delays in the postal service, we have opted to share this grid as it is, with the intention of updating it should anything significant come to our attention.

A few notes on our reasoning around certain propositions:

Proposition 19 – Property Tax Transfers
Proposition 19 is essentially a revitalization of the 2018 ballot’s Proposition 5, which California voters rejected. It increases the number of times that “eligible homeowners” can transfer property tax values to more expensive homes from one to three times, which would worsen the inequity in our current property tax system. Individuals with qualifying disabilities and victims of wildfires would remain limited to one transfer of their existing tax value.

Proposition 25 – Replace Cash Bail with Risk Assessments
UUJMCA remains committed to ending the practice of cash/money bail in California. The passage of Senate Bill 10 in 2018 was a watered down version of legislation intended to end cash bail in California. What was passed in 2018 essentially replaces the cash bail system with a “risk assessment” system to determine if individuals facing criminal charges can be given pretrial release and under what conditions. These “risk assessments” are hardly an improvement, as there are no clear guidelines for these assessments, thereby leaving assessments up to the discretion of local courts, a process which would inevitably lead to the continuation implicit racial bias and racism against black and brown people in our criminal justice system.

The American Bail Coalition has been fighting against SB10 in its original and current form, and has led to it being put on the ballot as a veto referendum for California voters to decide. Our partners and frontline communities have a range of responses to Proposition 25. While there is consensus that the passage of SB10 was a watered-down or sideways move in dismantling systems of mass incarceration, there are varied opinions regarding the referendum to veto it. Ultimately, we at UUJMCA have decided that its passage DOES demonstrate that there is an urgent and moral need to shift away from a cash bail system that is cruel and biased as it exists. Therefore, we have chosen to recommend a “Yes” vote on Proposition 25, with the intention of demanding training and accountability on implicit bias and systemic racism for anyone who is tasked with determining individuals’ “risk level” under this new system, and with the intention of continuing the push for an end to cash bail in California.